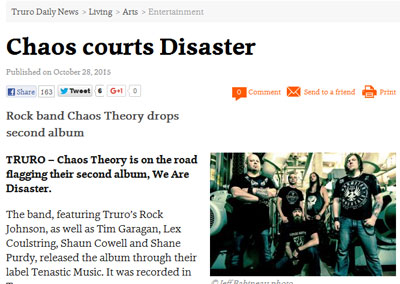 TRURO – Chaos Theory is on the road flagging their second album, We Are Disaster.

The band, featuring Truro’s Rock Johnson, as well as Tim Garagan, Lex Coulstring, Shaun Cowell and Shane Purdy, released the album through their label Tenastic Music. It was recorded in Truro.

“The album came together over the course of a year while working two new members into the band and still playing live,” said Johnson. “It was quite a demanding schedule but I think it was helpful to have new ideas and fresh perspective on the music. There is definitely a lot more intensity on the new album and overall, more focus.”

The album picks up where their debut album left off, presenting melodic rock songs draped over heavy riffs and with the power of full-blown metal. Chaos Theory gets nastier on We Are Disaster as they sink their teeth into many emotional and political themes including child abuse on the song, Comfortably, and a disingenuous social and political structure in Generation Genocide.

Johnson, who operates Tenastic Music, produced the album, which was mastered by J. LaPointe of Archive Mastering.

“We love the songs on the first record, but we’ve had four years to grow as a band and we have played a lot of live shows between then and now, even the old songs get a facelift when they are played live. It’s just the natural progression of growth as musicians and songwriters.”

“I think the album came out great, and I don’t feel there is a weak track to be found. If we didn’t feel a song was ready, it didn’t make the cut,” Johnson said. “College radio has started to pick up and get behind the album and we’ve charted top-10 in a few cities, including Halifax and Fredericton. Stations have actually played every song on the album since it was released and, to me, that is a testament to how strong the album is. It’s not based on the strength of one or two good songs, it’s the whole package.”

The band has filmed a video for the first single, Evaporate, which will debut in the next month. The band has two dates left on an Eastern Canadian tour, which saw them break ground in four provinces. They plan to tour again this spring.

The album is available through the band’s website: www.chaostheoryband.com, at CD Baby, on iTunes and through many other online retailers.

They are performing Dec. 12 at Gus’ Pub in Halifax to finish their Eastern Canada tour.