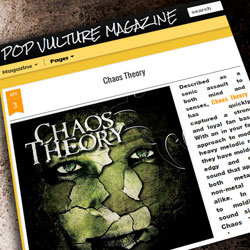 Described as a sonic assault to both mind and senses, Chaos Theory has quickly captured a strong and loyal fan base. With an in your face approach to modern heavy melodic rock, they have molded an edgy and catchy sound that appeal to both metal and non-metal fans alike. In addition to molding their sound since 2008, Chaos Theory has also generated a favorable reputation for their live performances. Fans of heavier melodic hard rock like Three Days Grace, Sevendust, Godsmack and Finger Eleven, will definitely want to check out Chaos Theory. The band is fronted by singer/songwriter Rock Johnson. He along with members Lex Coulstring (guitar/vocals), Scott McKenzie (lead guitar), Tim Garagan (bass) and Craig Brown (drums) complete this powerful and edgy ensemble.

"Since starting Chaos Theory in 2008 and going through a total of eight band members, the biggest accomplishment is solidifying a great team of musicians. This will be our third year together and has allowed us to define who we are as Chaos Theory."

popVLTR: You've been making moves in Halifax, how'd you get into music? CT: LexCoulstring: It’s a super feeling to know that the passion we put into Chaos Theory is now spreading out to those who can really enjoy it and embrace it. We just keep on rolling forward. As far as me getting into music, it was pretty apparent in my early childhood that music would be my calling. I was never into sports and every attempt to try to pick a sport up, it was clear I was not cut out for it. I was teased a lot and well quite frankly just sucked at playing. As a kid, there was nothing worse than being that last kid in the lineup to be chosen on someone’s team. I was surrounded by music since I was born. My father, uncle and grandfather all played piano and I naturally pick up the piano at around 8 years old. We all wrote our own songs on the piano so writing came natural. In the early 90’s I played a lot of air guitar to Guns ‘N Roses, Metallica, Megadeth and Motley Crue. Finally I got a guitar at the age of 15 and never put it down since.

popVLTR: Congrats on 'We Are Disaster', who are some of your influences? CT: LexCoulstring: Thank you! 'We Are Disaster' will be Chaos Theory’s sophomore album from our debut released in the spring of 2012. We are pretty excited about this new album. All of us have came along way and grown together since the writing of our debut album including defining our style and improving our skills as musicians. I’m a huge fan of modern heavy rock and metal genre. In my earlier years of playing I had the influences of James Hetfield (Metallica), Dave Mustaine (Megadeth) and Joe Satriani. However in the later years I been more influenced by Tony Rombola (Godsmack) , Zakk Wild (Black Label Society), John Connolly (Sevendust) and Adam Jones (Tool). I really dig modern styles of the alternative metal genre.

popVLTR: What are some of your proudest moments in music so far? CT: LexCoulstring: Since starting Chaos Theory in 2008 and going through a total of eight band members, the biggest accomplishment is solidifying a great team of musicians. This will be our third year together and has allowed us to define who we are as Chaos Theory. This group has also had the opportunity to enjoy great moments such as almost winning the chance to open for Metallica (2nd place), Winning a Loud Recording Of The Year 2012 award for our debut album, getting featured in online and print publications and really building a nice following. We are always humble about the recognition that comes our way because really, we just love playing live and making music to touch people’s lives like it touches ours.

popVLTR: What cool stuff is on the horizon for Chaos Theory? CT: LexCoulstring: Every year we keep raising the bar. We kicked off many marketing campaigns so far to get our music out there. We are being featured in multiple publications in the coming months, being featured in an upcoming movie, and have applied for many festivals for summer and fall (fingers crossed). We are playing the Maritime Metal & Hard Rock festival 2013 which is a huge festival in Atlantic Canada. With all this marketing and live shows, we are also writing and recording material for our upcoming album which also includes filming our official video for the new single ‘We Are Disaster’.