CHAOS THEORY RELEASES WE ARE DISASTER!! 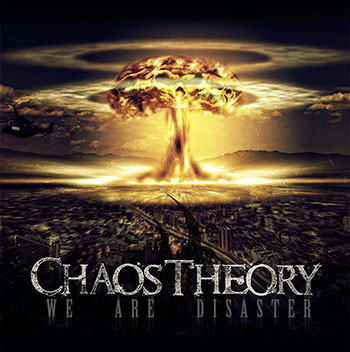 Halifax, NS – Chaos Theory have released their second album “We Are Disaster” through their label Tenastic Music. The album picks up where their award winning debut album left off presenting melodic rock songs draped over heavy riffs and with the power of full blown metal.  Chaos Theory gets nastier on “We Are Disaster” as they sink their teeth into many emotional and political lyrical themes including child abuse on the song “Comfortably” and a disingenuous social and political structure in “Generation Genocide”.

The album features eight previously unreleased tracks that have already started surfacing on college charts and online radio; in fact, to date all eight tracks from “We Are Disaster” have received radio play. “We Are Disaster” was produced by Rock Johnson of Tenastic Music and Mastered by J. LaPointe of Archive Mastering (Black Moor, Joel Plaskett). The band has shot a video for first single “Evaporate” which will debut in November.

Chaos Theory recently completed a whirlwind Eastern Canadian tour in support of “We Are Disaster” which saw the band break new ground in four provinces and still have a handful of East Coast dates left in 2015. The band will tour again in the spring.

The album is available through our website, at CD Baby , itunes and many other online retailers. 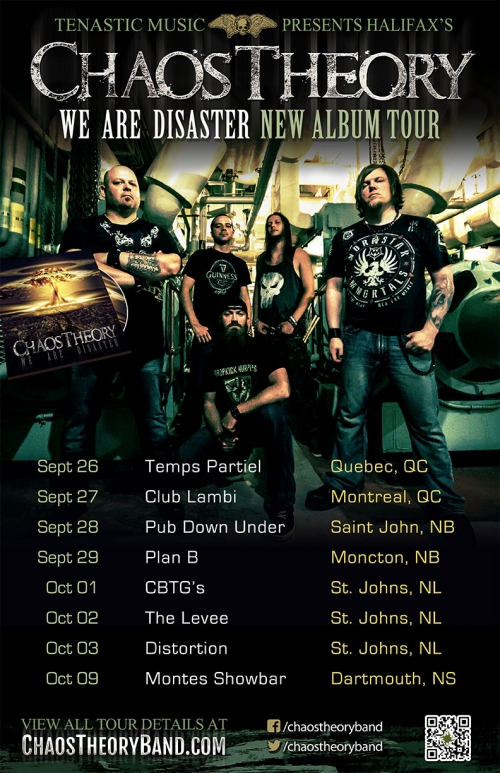 Halifax, NS – Chaos Theory have announced their Eastern Canadian tour in support of their brand new album “We Are Disaster”. The tour kicks off September 26 in Quebec City QC and ends Oct 3 in St. John’s NL. The band will play seven shows in the 8 day span in four provinces. The band will have their hometown CD release party on Oct 9 at Monte’s Bar & Grill in Dartmouth.

“We Are Disaster is the bands much awaited follow up to their award winning debut album and will be released officially on September 25, 2015. The album is available to pre-order online now. 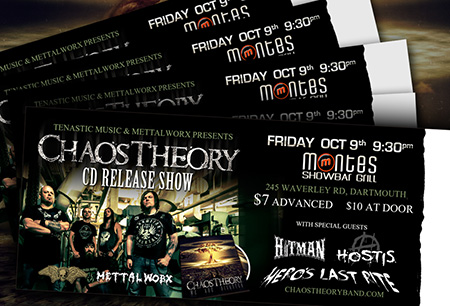 Advance tickets for Chaos Theory’s CD release party for their brand new album “We Are Disaster” are now available through the band’s web store. Tickets are $7.00 advance and $10 at the door. The show takes place October 9, 2015 at Monte’s Bar & Grill in Dartmouth, NS at 10:00 PM. Joining Chaos Theory will be Hero’s Last Rite, Hitman & Hostis, and the event will be hosted by Bill Arsenault of Mettalworx Music Group. Advance tickets will be available until October 8, 2015. Tickets ordered after September 25 will be available as will call.

Chaos Theory’s long awaited second album,”We Are Disaster”, is now available for pre-order through the band’s website. Pre orders will ship on or before September 25, 2015 and come with immediate download of the first single “Evaporate”! As a bonus to those fans who pre-order they will get the album for $8.00 instead of $10.00.

“Pre-ordering really helps us get the numbers right when it comes to ordering and budgeting, as independently funded artists it is incredibly important that we make smart financial decisions and this is just one way the fans can be part of that.” – R. Johnson, Chaos Theory

CHAOS THEORY TO PERFORM AT RIVERFEST 2015!! 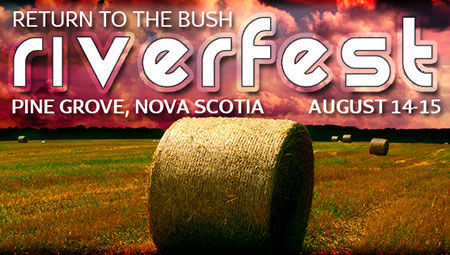 Chaos Theory will be one of over 35 acts to hit the stage at Riverfest 2015 an annual event now in its eleventh year! This will be Chaos theory’s forth time performing at the festival and will be hitting the stage opening night at 1:20 AM in Pine Grove, NS just minutes from Bridgewater. The two day festival runs August 14 & 15 this year and “Tent Crasher” (Early Bird) passes are still available until July 31st. To find out more about the festival and for ticket information check out the links below.